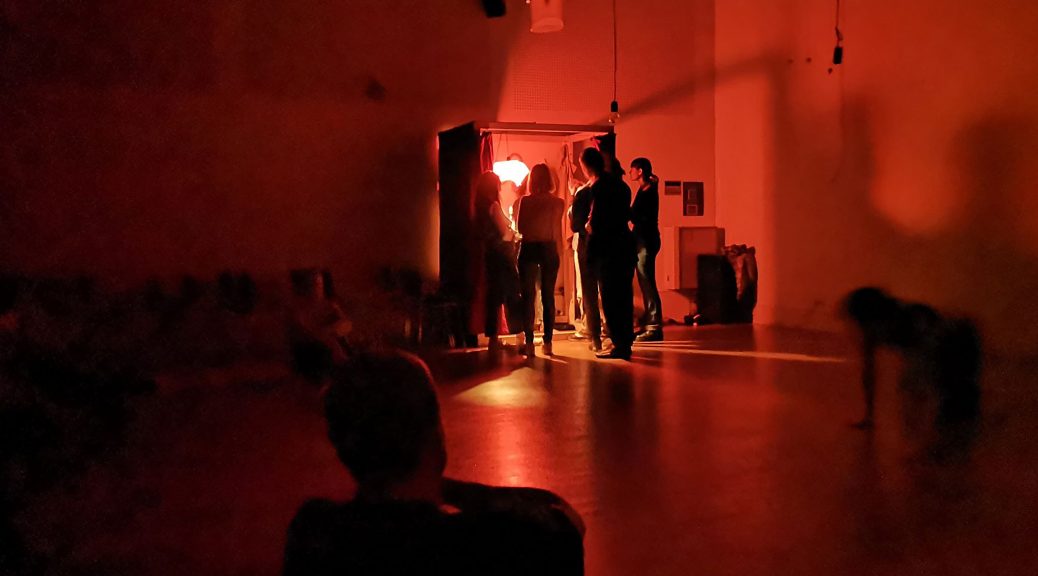 Presentation | 28 november during the event: The Handshake

Dimitri’s background is in fine arts focusing on the exploration of the participatory aspects of performance art. In his collaborative artistic practice, he is curious about the potential of human interactions while critically questioning the current forms of social encounters in our society. For previous projects Dimitri has researched the history of western ritual traditions while relating them to the phenomenon of participation in fine arts performances and theatre practices. Recently his work has turned towards the public space and engages with the performativity of social interactions that can be found within urban environments.

“Participation asks for the commitment of the audience: to put a part of themselves into the encounter. I believe that participation can make art less consumable and more social through creating collective actions.”

“I am interested in the religious experience. There are many ways how one can generate this state in different traditions, reaching from the unifying rituals of the tribal cultures, meditation or the practices of solitude in the protestant Christianity. This topic is covered in studies of anthropology, religion studies and theology.

“Anthropologists see religion as the construction force of society. Roy Rappaport describes religion as composed of two interrelated elements of the Sacred and the Numinous. The Sacred is a function of discourse, and the Ritual the event in which it is realised. The Sacred is what we know as institutionalised Religion with all its forms of practices. The Numinous, on the other hand, is an individual experience, an incomprehensible non-discursive element of Religion.

“Otto Rudolf in his essay Das Heilige (the Holy) makes a deep analysis of the Numinous from a theologian and psychological perspective. He describes it as something which can not be expressed but only can be talked about using analogies of emotional states which are common to us. He talks about the feeling of Fear, Grace, Dependence and Ecstasy as the emotions which come close to the Numinous.

“In this project, I am interested in exploring the ecstatic state. I am looking for ways how this state of euphoric excitement can be generated in a group of performers and then be transcended to the audience. To generate this state I would like to use techniques of breathing, sounding and movement.

“Breathing is a powerful instrument which can be used to influence the psychic states. In moments of fear, excitement or aggression our breath changes drastically. I am interested in using the variations in breath to generate the state of high excitement. In the performative research, I am planning to try different breath techniques inspired by dynamic meditation (Osho), shamanic practices, pranayama and holotropic breathwork. I have experience in these fields and would like to see how this techniques can be abstracted from the mentioned context and be possibly used to generate excitement.

“The voice is another interesting instrument which I am interested in. Similar to breath the voice is used in various traditions to generate certain states or to create unity among a group of participants. In the chakra sound meditation, vocals are sang separately related to the chakras to trigger a certain effect. In ritualistic practices, shouts or songs are performed to create a unifying experience. Further various humming and chanting techniques are worked with in eastern traditions to elevate the state of mind. Also in this context, I would like to try to find the core elements of these techniques and see how it can be used in my work.

“Finally movement. Dancing, shaking and various forms of rhythmic movement are used similarly as the voice and breath. In the Kundalini mediation shaking is an important element to generate energy in the body which is then further directed. Further movements from dance, shamanic practices and hatha yoga will be a starting point.

“If one takes a look at the history of avant-garde theatre then probably Jerzy Grotowski is the one who deepened the exploration of the religious state the most. In the tradition of Antonin Artaud, he was trying to elaborate on how the actor can reach a primordial state through physical action. Grotowski was aware that in our fragmented society the unifying experience of the ritual is not possible. But he believed that if the actor touches this primordial energy of the human being the audience through mere watching of it will be able to connect to it as well. However, Grotowski stopped the Theatre of Production after a few performances and focused his work more on research and the work with the actor. He saw theatre as a vehicle for the actor to reach a higher state of being.

“I think that he gave up the exploration of the possibilities to transcend the religious state to the audience a little early. As Rappaport states it, Ritual is important as it allows the audience to get in a transcendent state without an extended preparation or training. All these elements are included in the structure of the ritual. Ritual, therefore, makes these states accessible to ordinary people.

“With regard to this, I will look for a way of incorporating the explored techniques into a performance and look for ways to engage the audience. It is important for me to fuse these abstract techniques with motives of daily life and to make them, therefore, more accessible to the contemporary audience. The question is, what is the foundation fo ritualistic actions and how can it be translated into the language of contemporary western society? This is a very important point for me because I think that the mere presentation of something from a distant culture or time or just something completely detached from the profane reality, can not create the necessary relation to the audience. As a result, the audience becomes even more distant observing it as an object of entertainment instead of being drawn into it.

“I am aware that it would be easier to achieve these states in the audience by making them do a certain action. However, I think that the distance with which the people prefer to approach an artwork not necessary must be challenged through a forceful call for participation. I would like to look for a more authentic way to create a relation to the work and make the audience part of it.”