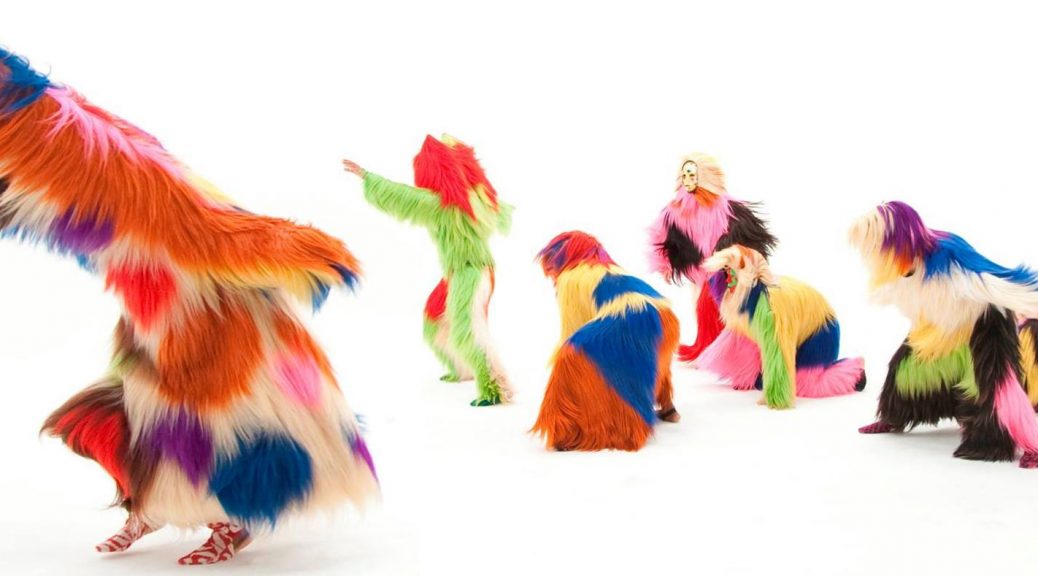 Next CLOUD Club will be a sonic trip to the unknown. Guided by sound artist Virginie Dubois (FR/NL), we’ll depart on a trance session, with sounds from here and the beyond. Virginie is preparing a new piece specially for this occasion, and you’re invited to join her experiment of ‘entrainment’ at the CLOUD/Danslab studio.

Entrainment in Biomusicology in the synchronization of organisms to an external rhythm. Together and with the construction of rhythms provided by Virginie, we’ll tremble, shiver and burst to beats from around the world.

This will be the first time that CLOUD Club hosts a sound artist to provide the dancing experience. CLOUD Club is an experimental  space to engage artists, choreographers, dancers, movers of all kinds and the audience on the dance-floor. Organized by CLOUD members Fazle Shairmahomed and Ludmila Rodrigues.

We hope to see you then!

Please be on time!
No shoes allowed, socks will rock!
Contribution € 7,00
Feel free to bring your own drinks

Virginie Dubois (FR, 1977) completed her art studies at the KABK Royal Academy of Arts & Koncon/Royal Conservatory in The Hague in 2013, and received a second master degree in applied arts at the Sandberg Institute, Amsterdam in 2014.
Her work focuses on the relationship between sound, space and architecture; and more generally between sound and the listener.
Using architecture and urban places as musical instruments, Dubois explores the sonority of space and develops sound installations, sound walks and public interventions with the idea to enhance the acoustic qualities of the space.

“In my approach, ‘walking’ and ‘listening’ are essential: they are the fundamental tools at the heart of my practice. By bringing awareness and presence to simple actions and social behaviors, my goal is to invite the audience to experience ‘listening’ as a playful and powerful methodology.
From walking to intentionally wandering, from hearing to carefully listening, one will learn how to consciously, and fully partake to the environment.
It is then, that the perception of sound becomes a spatial event, a material phenomenon, and a physiological experience.”
www.virginiedubois.com

Our resident Zwoisy Mears-Clarke will guide an intensive shaking session.

The physical practice of shaking is a personal preparation of “getting in tune” with ourselves so that when we sit the tensions will be dissolved. The repetitive action of continuously shaking can lessen and grow in intensity as we experiment with what state of the body/mind will be produced through this active release.

CLOUD Club is an experimental dance session where a new dancer/choreographer/artist is invited to guide a journey of about 2 hours. CLOUD Club is for everyone interested, from any ages and backgrounds – no expertise required! Read more on: CLOUD Club

Zwoisy Mears-Clarke was born in Jamaica and immigrated to U.S.A. at the age of 13, before heading off again at 21. Following this ongoing migratory experience Zwoisy’s work focuses on the translation of untold stories. Paired with discussion of written and oral stories throughout the process of creating each piece, full-bodied movement, gestures, scholarly literature and collaboration are used to support its materialization. The aim of this process remains to provide alternatives ways to share experiences and form connections between estranged communities. Zwoisy received a B.S. in Biomedical Engineering at Columbia University, New York City and a B.A. in Physics and Dance at Oberlin College, Oberlin, U.S.A. in 2012. Within the work, one will find that these opposing yet complementary concepts of the body are connected. In the recent years, Zwoisy has studied with Billie Hanne, Jodi Melnick, Kirstie Simson, Mary Cochran, and Nancy Stark-Smith, and has performed the works of Isabelle Schad,Susan Rethorst, Kyle Abraham, Will Rawls, and Wendy Jehlen. Zwoisy has performed and shown work at venues both in Berlin and New York City, such as HAU, Sophiensaele, New York Live Arts, the Tank and the Glicker-Milstein Black Box Theatre. Currently, Zwoisy is based in Berlin.

Antonin Comestaz and Keren Rosenberg have been working in the studio of CLOUD/Danslab these last few months. Both with their distinct style. Antonin will present “Then, Before, Now, Once more” developed in CLOUD/Danslab and Keren will present “Body-House” developed in Dansateliers Rotterdam. Their connection is a special one, which is growing in CLOUD. The last edition of CLOUD Club has been hosted by Antonin Comestaz, and the next edition in on June 13 will be hosted by Keren Rosenberg. Read more about the Gaga Edition of CLOUD Club with Keren or see Facebook event

Then, Before, Now, Once more – choreography Antonin Comestaz
The universe seems to play by the rule of constant change. Nothing remains, everything transform. Life and death, days and nights, seasons… What is now isn’t what it was then, nor before, but may occur again. Nature lets us witness these patterns in everything, including feelings. How do we cope with this fact when we seek for eternity?

About Antonin Comestaz
Antonin Comestaz (1980) is a French dancer, choreographer and multidisciplinary artist based in The Hague (NL). He trained at the Paris Opera Ballet School and went on to dance with companies including Paris Opera, The Hamburg Ballet, T.T.M (Tanz Theater München), Ballet Mainz, and Scapino Ballet. During his tenure at these companies, Antonin has worked with renowned choreographers, such as John Neumeier, Marco Goecke, Rui Horta, Carolin Carlson, Ed Wubbe, and Jacopo Godani among others. Antonin’s artistic career has been forged by his ability to constantly explore and redefine boundaries in the various fields of dance, from ballet to neo-classic, modern and improvisation.
www.antonincomestaz.com

Antonin has developed this choreography in the studios of CLOUD/Danslab and Korzo. This work has recently premiered at the Open Stage of Dansmakers Amsterdam. Read more about his residency at CLOUD.

“The body and me are not the same.
The body is the house in which I live in.
I don’t own this house and this house is not me, though its my house.
Sometimes I feel my body as a home and sometimes it becomes an unfamiliar property.
I live under my skin.
Sometimes I come through the walls of my skin to feel, I even open small cracks to the outside, I don’t like exposing too much cause then I am vulnerable.”

About Keren Rosenberg
Keren’s works were presented in various festivals & theaters in Israel, Iceland, The Netherlands and Ireland. In 2011 she was invited by Ohad Naharin to study the Gaga movement language. Since then, she has been invited to teach Gaga as well as her own creative workshops in various dance companies and institutions around Europe.

Her recent work ‘Body-House’ premiered at the One Night’s Dance Project at Dansataliers, invited to Korzo Theater, Dansmakers Amsterdam and Tel-Aviv Dance This Summer.

Keren has been working in CLOUD/Danslab in several residencies of which the most recent is “The Never Dry Land”. Read more about her last residency in CLOUD

CLOUD Club is an open jam session, for anyone looking for dance as movement, fun and/or work out. It’s not a party, it’s a free improvisation, experimental and unpredictable dance club. For amateurs and professionals, beginners or advanced dancers of all sorts.

It is your opportunity to enjoy a real dance studio, to get together and liberate the dancer beast in you. Since its beginnings in 2014, we have had an increased number of enthusiastic participants who get to know CLOUD – bridging audience and dancers worldwide.

This edition will be hosted by one of our enthusiastic clubbers and choreographer Antonin Comestaz. Through a series of tasks and games based on improvisation, he will bring the Clubbers to discover and rediscover their body, creativity and fantasy in a playful, interactive session. In April Antonin Comestaz will also be a resident at CLOUD. Read more about him and his residency.

Notes:
– we advise you to wear comfortable clothes and shoes are not allowed.
– bring your own drinks!

Choreographer Antonin Comestaz will work with dancers Jefta Tanate & Inés Belda Nácher, exploring the spontaneous reactions of two different entities who find themselves in presence of each other in confined space, by mistake or hazard, against there will. One task will be to define the protagonists (which wont necessarily be “Human”) through there physicality and personality. Then, what situations will arise from the encounter? Which behavior will they adopt? Aggression? Affection? Mimic? Will they be able to tame each other? Antonin proposes a reflection on the mechanisms of the mind in presence of “the other”, the unknown.

Antonin Comestaz (1980) is a French dancer, choreographer and multidisciplinary artist based in The Hague (NL). He trained at the Paris Opera Ballet School and went on to dance with companies including Paris Opera, The Hamburg Ballet, T.T.M (Tanz Theater München), Ballet Mainz, and Scapino Ballet. During his tenure at these companies, Antonin has worked with renowned choreographers, such as John Neumeier, Marco Goecke, Rui Horta, Carolin Carlson, Ed Wubbe, and Jacopo Godani among others. Antonin’s artistic career has been forged by his ability to constantly explore and redefine boundaries in the various fields of dance, from ballet to neo-classic, modern and improvisation.

Antonin began choreographing in 2006. His works have since won a number of awards and nominations, such as for “Hand in Hand” (Nominated at The international internet dance festival SideBySide-net 2006), “Flesh and Blood” (Nominated at The International Choreography Competition Hannover 2008), “She” (1st prize for interpretation, 3rd prize for choreography, as well as Audience Prize at the Stuttgart Internationales Solo-Tanz-Theater Festival 2010).

Since 2013 the primary focus of Antonin’s work has been freelance choreography. That year marked the creation of his landmark cross-genre piece, “Out of the Grey”, commissioned by Korzo Productions in The Hague. It has since been performed in various festivals across Europe, and was selected to be part of 2014 Priority Companies by Aerowaves. His second venture in collaboration with Korzo was the 2014 creation, “Plastic Junkies”.

Antonin possesses a passion for drawing and music and has composed music for most of his pieces to date. His works often revel in the absurd & darkly comic expressions of everyday life and humanity, using his playful, quirky and highly engaging choreographic style.

Once a month, you have the chance to move and groove at CLOUD Studio! It’s show time. It’s work out. It’s the best hang out in town! It’s CLOUD Club!

Come on show off your dance skills!

The forth edition (on September 20th) was hosted by the awesome Damani Leidsman, who gave a warm-up of 45 minutes, a journey through many faces of Africa, driving  flow, communication, rhythm, grounding, and most of all, a lot of fun!
We continued the evening vibrating freely on varied music styles.